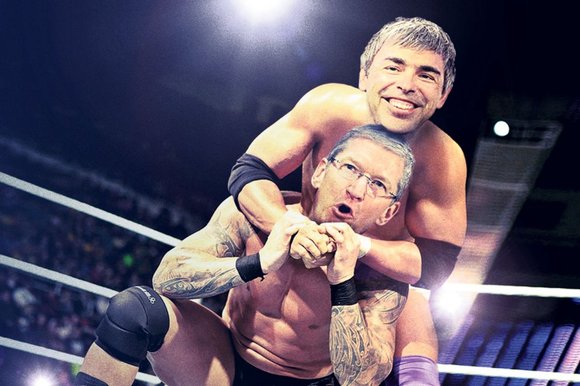 “The price that most developers will pick is free,” said Steve Jobs, late co-founder of Apple, when he launched a store for iPhone applications in 2008. Apple and software developers had “exactly the same interest, which is to get as many apps out in front of as many iPhone users as possible,” he said.

Five years later, the gadget goliath has proved there is money to be made in shunting out goods for nothing. Since its inception, more than 50bn apps have been downloaded by iPhone and iPad owners, generating $9bn (£5.8bn) for software engineers. Apple, which takes a 30% cut of all paid-for applications, has pocketed $3.9bn.

The app store has become the cornerstone of Apple’s colossal financial edifice, luring and then locking in its devoted followers.

But its dominance is under savage attack. Google’s copycat apps store is on track to leapfrog Apple by the end of the summer, strengthening the position of its Android mobile operating system.

Android’s unstoppable rise is only one of the many conundrums that Tim Cook, Jobs’ successor, must solve if he’s to keep Apple ahead of the pack. Last week, a Washington trade body issued a shock ruling, which, if upheld, could force Apple to stop selling older versions of the iPhone in America, its most lucrative market.

More ominous still was the gauntlet thrown down by Google last month. The internet search giant declared war on its bitter rival, promising to launch a dirt-cheap smartphone it claims will be better than the iPhone. The objective is to crush the stratospheric profit margins Apple earns from its flagship device.

The iPhone has, by some distance, been the most profitable gadget in history. Last year, Apple delivered after-tax earnings of $42bn after shifting 125m smartphones and 58m tablet computers. For every dollar of revenue it kept 42 cents as profit — an unprecedented haul for a gadget maker.

But those vertiginous margins are falling amid ferocious competition from Samsung, now the world’s most popular smartphone maker. Apple, paradoxically, is paying the price for its own success.

Because the iPhone has secured a dominant position in developed nations, especially America, its only avenues for growth are up-and-coming economies. In India and China, though, consumers are snapping up cheap handsets that use the Android platform. To compete, Apple may have to cut prices — a prospect that has unnerved its shareholders. The company’s stock has plunged 38% since its all-time high last September, wiping nearly $300bn off its market value.

On top of this, Google is bragging about its Moto X. The handset is scheduled to go on sale in October and will be the internet giant’s first smartphone since it splashed out $12bn on Motorola in 2011.

According to Dennis Woodside, the head of Motorola, the device will be able to anticipate a user’s next move, from making a call to checking emails or taking a photo.

The Moto X, Woodside suggested, is likely to be priced at a steep discount to the iPhone. High-end phones currently “earn 50% margins”, he said, adding: “We don’t necessarily have those constraints.”

Following a brutal attack by Congress on Apple’s tax affairs, Google is cannily wrapping itself in the stars and stripes — the Moto X will be the first smartphone assembled in America.

Despite the angry attacks on its own tax arrangements, Google is well on its way to snatching Apple’s crown as the kingpin consumer technology firm of the 21st century. As it amasses more and more data on its users, its position as the world’s dominant internet company grows stronger every day.

Its grip over the smartphone industry is tightening, while its tentacles spread ever farther from its origins in internet search. The Google X research laboratory is working on two potentially ground-breaking products: a driverless car and internet-connected glasses.

Larry Page, Google’s co-founder and chief executive, seems willing to sacrifice short-term profits to fund these “moonshot” projects. Google ploughed $6.8bn into research and development last year — twice Apple’s $3.4bn. No coincidence, perhaps, that under Cook, Apple has failed to produce a new category of device to capture consumers’ imaginations, as Jobs achieved with the iPhone and iPad.

Cook recently hinted at “exciting new product categories”. But long-mooted devices such as a web-connected watch, and particularly a television set, are starting to assume mythological, Godot-like status.

While Apple labours to dream up a new device, it has become embroiled in ever more esoteric legal battles to shore up its position in the smartphone industry.

Last year saw a substantial victory in a California court, which ruled that Samsung had infringed a number of its patents. The South Korean company was ordered to pay $1bn in damages, although the penalty was later more than halved on appeal and the case is heading back to court.

In a further reversal of fortune for Apple, Washington’s International Trade Commission slapped an import ban on a number of iPhones and iPads after ruling that the gadgets infringed a Samsung patent covering how data is transmitted over wireless networks.

It is expected that Apple will appeal directly to Barack Obama, who was given an iPad by Jobs and has the authority to overturn the import ban on public policy grounds. However, the White House has historically resisted using this extraordinary power: Ronald Reagan was the last president to veto an ITC ruling and only the fifth to do so since 1916.

Cook cannot count on much goodwill on Capitol Hill after a recent mauling in front of a congressional committee over Apple’s “complicated and pernicious” tax affairs.

The company was accused of dodging $9bn of US taxes last year by channelling overseas revenues through three Irish-registered companies. Cook denied using “gimmicks” to sidestep the taxman.

The ITC order, which is set to come into force in 60 days, is unlikely to inflict lasting damage as it covers older devices that Apple has begun to phase out. Nevertheless, it is a potent symbol of how the tide is turning against the company, even in its largest and most lucrative market.

Cook and Sir Jonathan Ive, Apple’s British design guru, will administer an adrenaline shot this week as they unveil a new souped-up version of its iPhone operating system. It is expected that outside developers and other technology companies will be granted more autonomy in the software they produce for the apps store.

This could be a seismic move. In the past, Apple has closely guarded the iPhone and iPad platform, but Cook has seen the success the Google store has enjoyed by creating an open system for developers. Apple cannot afford to stand still. Handsets using Android are proliferating and threaten to eclipse the iPhone. Cook may have no choice but to ape its rival and fling open the gates.